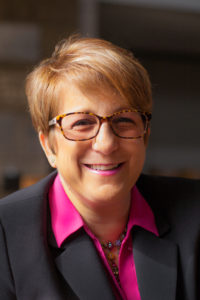 Stacey Schlosser has been a member of Temple B’nai Or, officially since 1989. She has been attending services and events since her second date with her husband, Bill, in 1985. Stacey and Bill have two children, Caya and Scott. They both began their journey at TBO in baby carriers at many services and Sisterhood meetings. They went through the Religious School, celebrated their B’nai mitzvahs, Confirmation and Orim as well as both serving as Youth Group President.

Stacey has been involved with the temple Sisterhood for over 30 years, briefly taught in the religious school, was an aide for a short stint in the Pre-school, ran the Cradle Roll ( precursor to Torah Explorers and Tot Shabbat), organized the Purim Carnival for ten years, served as Membership Chair for three years and co-chaired two Rabbi Searches. She has devoted countless hours to being a positive energy at Temple B’nai Or.

Stacey is the owner of Glassworks Studio on South St. in Morristown. She has served on several local boards including The Morristown Partnership, Sustainable Morristown and Morristown Women in Business. Stacey has a Bachelor of Science from Ithaca College and is certified to teach N-8 in the State of NJ.

She likes to say she spent her childhood in Rockland and Westchester Counties but grew up at Temple B’nai Or.

Past Presidents of Temple B’nai Or